Baker Mayfield led the Sooners to a 59-17 victory over the University of Louisiana at Monroe. Baker went 14 of 20 for 244 yards and three touchdowns. The game was over by halftime with the Sooners taking a commanding 42 to 0 lead over ULM, Baker didn’t play the second half. The Sooners got the much-needed bounce back win, giving them confidence before next week’s make or break game against Ohio State. If OU loses next week the season will be over, there will be no chance a two loss OU team would be able to get in the playoffs. If they win however, they will be one step closer to getting back to the playoffs. One thing is for sure next week, Gaylord Family Memorial Stadium will be packed, and will be louder than ever with the latest renovations closing the stadium in the south end zone.

The play of the game was a 62-yard bomb from Mayfield to Nick Basquine. Basquine and Mayfield were on the practice squad together two years ago and it was like they didn’t even skip a beat Saturday night. Mayfield was so overjoyed he sprinted down to celebrate with Basquine and it reminded us of another famous Oklahoma athlete. 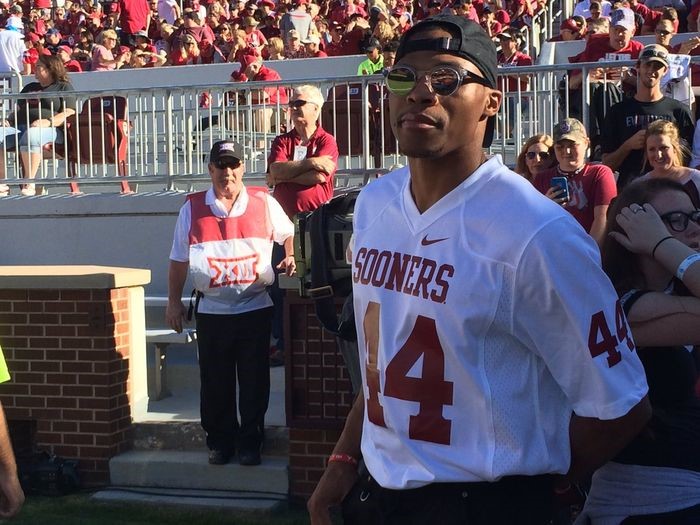 Russell Westbrook!!!!????? That’s right folks he and Westbrook have a lot more in common than people realize. The first similarity they have is the offense runs through them, they both have the option to change the offense at almost any time. Russ the point guard brings the ball up calls the play then runs it. Baker the quarterback relays the play call to his teammates and then changes the play as he sees fit.

They both lose the game they need but don’t absolutely must have. What I mean by that is, when these guys have big games and if they win those games it will make life easier for them, but if they lose they are not eliminated from title contention but it makes it much harder. For example, last season OU lost to Texas. That didn’t eliminate them from the playoffs but it made it harder for OU to make it. This year the letdown game was against Houston. Russell has had his share as well, Game five against the Memphis Grizzles where they let go of home court advantage. The very next series against the LA Clippers giving up home court advantage again. The great thing about these superstars was even though they helped put their team in a hole. They were able to get themselves out, and who doesn’t love the drama anyway? The next thing they have in common is they both made the final four in college.

One of the keys in order to be a superstar is your swagger, Russ and Baker share the same type of swagger. I am using this term really to describe how they play the game and how they handle themselves off the court. On the court you see them scream after every big play. You see them hyping up all of their teammates. They are both considered the players with the biggest heart, will never give up, and will make the big play to get them back in the game. As far as the swagger of the field, well we will let you be the judge of that.